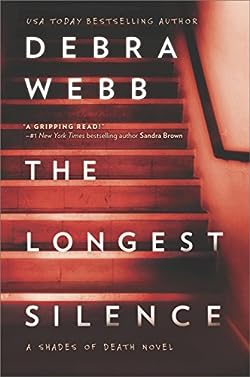 Book 4 in the Shades of Death series

Joanna Guthrie was free. She had been for eighteen years–or so she needed everyone to believe. What really happened during the longest fourteen days of her life, when she and two other women were held captive by a dangerous serial killer, wasn’t something she could talk about. Not after what they had to do to survive.

But when more women go missing in an eerily similar manner, Jo knows her prolonged silence will only seal their fates. She’s finally ready to talk; she just needs someone to listen. FBI special agent Tony LeDoux can’t deny he finds Jo compelling–he’s just not sure he believes her story. But with the clock ticking, Jo will do anything to convince him, even if it means unearthing long-buried secrets that will land them squarely in the crosshairs of the killer…

The Longest Silence was last modified: March 29th, 2018 by admin