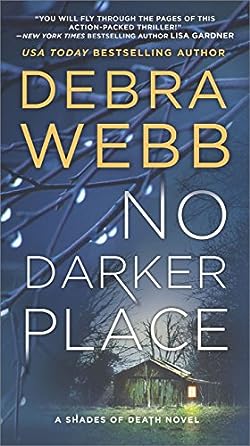 Book 1 in the Shades of Death series

Detective Bobbie Gentry has one objective: to stop the serial killer who robbed her of her husband, her child and her life. Nick Shade understands Bobbie’s pain and her desire for vengeance. He’s on a mission of his own, and the murderer known as the Storyteller is next on his list.

Nick knows that the best way to find his target is to stick close to Bobbie. But as she becomes more and more reckless in her attempts to lure the Storyteller out of hiding, he has to make a choice.

Will he protect her from herself even if it means passing up the chance to take out one more monster? As for Bobbie, she’s forced to decide just how much she can trust this stranger who knows so much about her.

And both of them are about to learn whether or not two broken people can save each other.

No Darker Place was last modified: March 9th, 2018 by admin