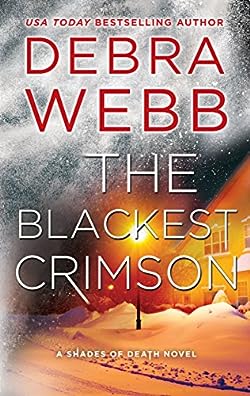 Book 0.5 in the Shades of Death series

He’s known as the Storyteller—and all his tales end in merciless death.

Detective Bobbie Gentry’s hunt for a heinous serial killer is interrupted when the sadistic Storyteller finds her first. Captured on Christmas Eve and held in a cabin deep in the woods, she must survive for the sake of her family.

Bobbie cannot leave her little boy orphaned and alone—and she craves the chance to avenge her husband’s murder. But not one of the Storyteller’s fourteen victims escaped his torturous game alive, and he’s obsessed with breaking Bobbie. From tattooing the story of her torture onto her back to violating her in every imaginable way, he’s determined to make her victim number fifteen.

In the depths of winter and the shadows of a rustic prison, Bobbie must make a choice to either end the torture with surrender, or fight like hell for survival.

The Blackest Crimson was last modified: March 9th, 2018 by admin