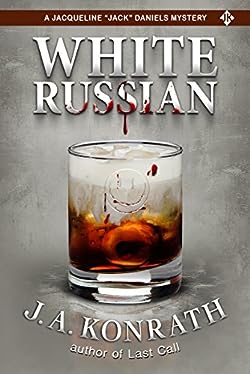 Just when you get out…

Former Chicago cop Jack Daniels thought she’d left her former life behind. She’d traded her badge for a toddler, and her lifelong pursuit of heinous serial killers for a boring house in the suburbs.

…they pull you back in.

Then Jack sees some pictures. Pictures of men who were supposed to be dead. And once again, against the fierce insistence of her husband, Phineas Troutt, Jack reluctantly straps on her gun and goes hunting. Hunting for the worst of the worst.

This leads to a trek across the Great Plains, searching for an alleged white slavery ring, on a collision course with three of the most horrible villains Jack has ever faced.

But Jack, and her irritating buddy Harry McGlade, will face them, and much more. Because they’re prepared to go to hell and back to rescue an old friend.

The trick will be getting back in one piece. And–spoiler alert–they don’t.