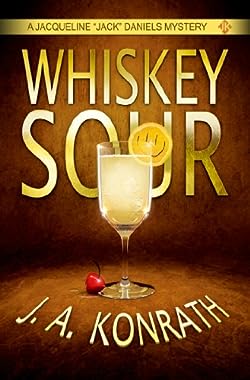 Lieutenant Jacqueline ‘Jack’ Daniels is having a bad week. Her live-in boyfriend has left her for his personal trainer, chronic insomnia has caused her to max out her credit cards with late-night home shopping purchases, and a frightening killer who calls himself ‘The Gingerbread Man’ is dumping mutilated bodies in her district.

Between avoiding the FBI and its moronic profiling computer, joining a dating service, mixing it up with street thugs, and parrying the advances of an uncouth PI, Jack and her binge-eating partner, Herb, must catch the maniac before he kills again…and Jack is next on his murder list.

Whiskey Sour is full of laugh-out-loud humor and edge-of-your-seat suspense, and it introduces a fun, fully drawn heroine in the grand tradition of Kinsey Millhone, Stephanie Plum, and Kay Scarpetta.