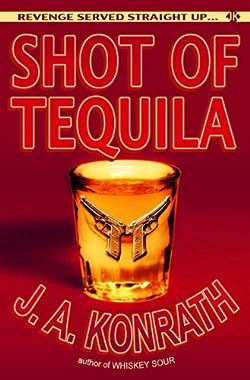 A GUTSY ROBBERY Several million bucks, stolen from the mob… A PERFECT FRAME All caught on video, with no chance of redemption…

A RED HOT RECIPE FOR RAMPAGING REVENGE Now one man must face the entire Chicago Outfit, a group of hardened Mafia enforcers, a psychotic bookie, the most dangerous hitman on earth, and Detective Jacqueline Daniels…

His name is Tequila. And he likes those odds.

Shot of Tequila takes place in the early 1990s, and is both an homage to and a re-envisioning of classic action novels by authors like Mickey Spillane, Ross MacDonald, Donald Westlake, and Elmore Leonard, but with a more modern twist. The breakneck action is intercut with scenes featuring Konrath’s series hero Jack Daniels, here as a supporting character chasing the main protagonist.

Shot of Tequila was last modified: February 12th, 2018 by admin