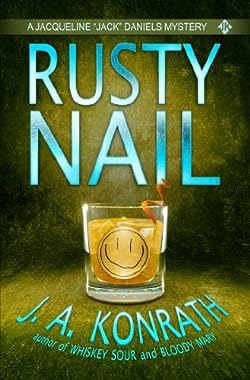 Lt. Jacqueline “Jack” Daniels of the Chicago Police Department is back, and once again she’s up to her Armani in murder. Someone is sending Jack snuff videos.

The victims are people she knows, and they share a common trait — all were involved in one of Jack’s previous cases. With her stalwart partner hospitalized and unable to help, Jack follows a trail of death throughout the Midwest, on a collision course with the smartest and deadliest adversary she’s ever known.

During the chase, Jack jeopardizes her career, her love life, and her closest friends. She also comes to a startling realization — serial killers have families, and blood runs thick.

Rusty Nail features more of the laugh-out-loud humor and crazy characters that saturated Whiskey Sour and Bloody Mary, without sacrificing the nail-biting thrills.

This is Jack Daniels third, and most exciting, adventure yet!