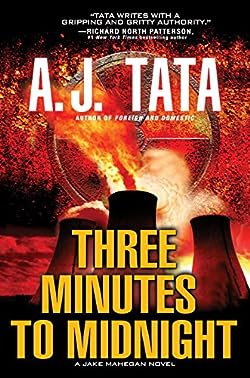 Abducted less than twenty-four hours upon her return from Afghanistan, Cassidy’s disappearance from a Fort Bragg compound is more than a security breach. It is the first stage of a large-scale domestic attack that few Americans could imagine–or survive…

Enter Delta Force veteran Jake Mahegan. The seasoned operative is on a personal mission of vengeance, tracking down his mother’s killer at a drilling site in North Carolina. When he’s assigned the task of locating the geologist, he can’t help but wonder if her abduction is connected to the fracking magnate he’s pursuing. But when a North Carolina nuclear plant is attacked, and then another, in a matter of days, Mahegan knows it’s no coincidence.

When a third nuclear plant is targeted, Mahegan has no choice but to try to stop the terrorists. If he fails, our nation falls. The countdown is launched. The clock is ticking. Armageddon begins…Three Minutes to Midnight.